I’ve loved books for as long as I can remember. I almost used to devour them when I was younger – taking them out while I had my lunch and being more likely to eat up the black-and-white, illustration-infused pages rather than the food in front of me. Over the years, I’ve read some great books and I want to start sharing them on my blog. Hopefully, I’ll introduce some people to writers and books they mightn’t have read before, and, if not, well, I’ll have a record of the books I’m reading and have read. Each month, I’ll be posting an installment of, what I’m calling, the Booked Up series – Each month I’ll be writing brief recommendations on a set of 3 books arranged according to specific themes or genres, or whichever way I think is best to group the books I’ve chosen. This October, I’ll be talking to you about three amazing books written by three different women of colour authors. These universal books deal with themes such as love, family, friendship , society, identity, and finding your way through life, as well as highlighting issues such as immigration, diaspora, race and culture in realistic, refreshing and impressive ways. 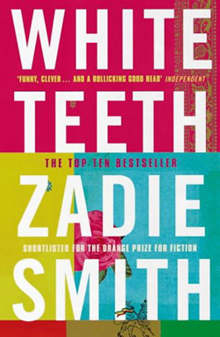 White Teeth, Zadie Smith’s debut novel is a contemporary classic about life in the melting pot of culture and characters that is London city.  The novel proves itself to be dark, humorous and insightful all at once as an omnipresent narrator, full of wit and amusement, entertainingly sheds light on a section of the world filled with fully-formed but often confusing and complex characters.

The novel interweaves the stories of three families over three generations, delving into the intricate issues of their lives. At the core of the novel are the wartime friends and self-proclaimed heroes, Samad Miah Iqbal, a Bangladeshi immigrant, and Archie Jones, a white Englishman, and their respective families. The book travels between a diverse range of characters, situations, locations, time periods, and perspectives that primarily play themselves out on the multicultural urban stage of London and gradually build towards a unified crescendo. Smith is exceptionally talented at creating realistic dialogue, which is particularly impressive when one looks at the wide variety of characters in the novel – each one given an energetic,distinctive and believable voice that stamps itself into the narrative, whether it belongs to a bumbling English man, a frustrated Bangladeshi housewife, a rebellious London teenager, an Oxbridge-educated couple or a righteous elderly Jamaican woman. Smith creates a detailed and realistic world, with commentaries on race, gender, society and culture woven into the stories she tells. Her world highlights social conflicts and divides that often live together and, at times, seem difficult to overcome. From the banality of halal butchers and English breakfasts to the world of war, fanaticism and genetic engineering, Smith is impressive in her commitment to covering all the bases. White Teeth is an ambitious, energetic, masterfully-written novel that deals with the big themes of life, morality, religion, society, culture and race  in a light-hearted, but still profound, way and will have you not wanting to put down the book as you uncover layers of family secrets and wander around the vibrant world she has built.

Chimamanda Ngozi Adichie’s Americanah is a warm, wise and welcoming novel which follows the lives of the primary protagonist, Ifemelu, and the character of Obinze, her teenage love. While the novel is often described as a romance novel, to reduce this novel to merely a love story is an injustice, as it deals with a wide range of important issues including immigration, race, gender, family and love in a contemporary world filled with technology, the internet and commercial culture.

Ifemelu is a sympathetic, charismatic, clever and complex heroine who is challenged with negotiating her surroundings and navigating countries and social spheres that aren’t always welcoming.  The novel travels between Nigeria, America and England as it traces the lives of Ifemelu and Obinze. Adichie, refreshingly and innovatively, incorporates the online world of interactivity and blogging into her novel, as Ifemelu takes to blogging in order to express her mind in times of trouble and thought and to make sense of racial, national, cultural and gendered borders. With this recurring blog form throughout the novel, Adichie creates a recognisable modern world informed by technology while highlighting that issues of the past are certainly not frozen there. The novel understands and exemplifies the difficulties of distance and dissatisfaction and explores the desire to carve a place for yourself in an ever-changing world. Adichie’s novel is beautifully written in an extensive and indulgent style, with passages that often seem like carefully-constructed paintings: “Aunty Uju collected all her dissatisfactions in a silk purse, nursing them, polishing them, and then on the Saturday of Ifemelu’s visit… she would spill them out on the table, and turn each one this way and that, to catch the light.” Adichie invites her readers to contemplate a host of issues with Ifemelu, from natural hair, America’s racism problem and interracial relationships to immigration issues, the nuances in understandings of race across countries and the persistence of memories. Ultimately, Americanah is a love story which incorporates the wider world into its folds and leaves us wondering if the tides of life will allow Obinze and Ifemelu to reunite after their separation – I guess you’ll just have to read the novel to find out what happens.

The Namesake by Jhumpa Lahiri

I studied Jhumpa Lahiri’s debut novel The Namesake as part of my undergraduate dissertation and it remains one of my favourites. Lahiri’s short story collection Interpreter of Maladies raised her recognition as a literary figure but her first novel offers a fully-fleshed out focus into the life of one immigrant family. At its core, it’s a family story that deals with issues of life, loss, love, diaspora, identity and culture. Throughout the novel, Lahiri explores the importance of names, history, tradition, memories, displacement and paving a way for oneself in life.

The novel follows the family of Ashoke and Ashima Ganguli, Indian immigrants in America, and primarily the protagonist Gogol, their American-born son, as he navigates his life and identity. The Namesake travels between time periods and locations in order to establish the diasporic feelings that are infused within the novel, with many of the characters being preoccupied with travel,  which symbolises the significance of not only physical and national movement, but also psychological and cultural movement. The novel is self-consciously meta in its references to the ‘The Overcoat’, a short story by Russian author Nikolai Gogol, who the protagonist is named after. It’s a wonderfully-written novel, enhanced by its enchanting and elegant prose style. Lahiri is meticulous and methodological as a descriptive writer, using a distanced third-person narrator to delve into the Ganguli’s family as a calm watcher. Lahiri manages to exceptionally capture the feelings of being lost in the diaspora and the nature of double lives and hybrid identities as well as inter-generational conflict among immigrants and their children. Lahiri offers a honest and informed perspective of the Indian immigrant experience in America, inviting you to understand the everyday situations and longings of these characters. Her writing style is soft and quiet but undoubtedly leaves a pronounced and distinctive mark on the reader. Ultimately, Lahiri manages to create a refreshing and realistic representation of the Indian diaspora, shedding light on feelings of displacement and rootlessness, attempts at assimilation and the confusions of cultural conflict and hybridity in a world characterised by globalisation and the blurring of national and cultural boundaries.